…but first some thank yous; to Gill & the boys and my wider family for their support and also for all the well wishes from many good friends including my ex-colleagues of PNC who gave me a good send-off.  Also, the staff at the Ecologia Youth Trust have been tremendously helpful with arranging my placement in double-quick time.  All have been nothing but supportive about my travel plans and the enthusiasm has spurred me on to get to this point, …the commencment of my trip to the Orion Children’s Community.

I fly to Domodedovo airport tomorrow morning to spend one day with friends in the centre of Moscow before joining other volunteers on Wednesday afternoon and then drive down to Orion.  Still plenty to do today, but please add comments using the blog box and I will do my best to reply and update this blog during today and for the rest of the time of my trip.

Some Russian humour… A Communist died and since he was an honest man albeit atheist, he was sentenced to rotate spending one year in Hell and one year in Heaven. One year passed and Satan said to God : “Take this man as fast as possible, because he turned all my young demons into Young Pioneers, I have to restore some order.” Another year passed, Satan meets God again and tells him : “Lord God, it’s my turn now.” God replied : “First of all, don’t call me Lord God, but instead Comrade God; second, there is no God; and one more thing – don’t distract me or I’ll be late to the Party meeting.”

-morning:  An early start, even the larks were still sleeping when we left the house this morning.  On the plus side most humans were asleep too making the whole journey from home through to departures stress free.  Not much to add at this stage, matters to write about should get more interesting upon arrival in Moscow and the onward journey to Orion on Wednesday…

-afternoon:  A fantastic trip all the way to the hotel in central Moscow where I am staying with friends for just the 1 night.  First time saying hello in Russian on Russian soil was to Passport Control – not  known for their sense of humour although he seemed to find my attempt of a greeting mildly amusing. Collected by my very good friend Patrick at Domodedovo airport improving my pronunciation of “zdrastvooytye” upon each attempt as we made our way passing from driver to doorman to receptionist etc.  Treated to my first ever Georgian cuisine restaurant by Patrick, Irina and their lad Ciaran – very tasty food which I recommend (if you can find a Georgian restaurant near you, I don’t recollect many in HH).  Tomorrow I’m back to the airport to meet with 2 other volunteers and the driver from Orion to head down to the Community with them for my first visit.  Busy day tomorrow, next update is likely to be Thursday with less about my travels and more about Orion instead.  Pictures below are of Domodedovo airport, the vast roads approaching Moscow centre and view from the hotel

Russian fact of the Day….

Soviet cosmonaut Valentina Tereshkova became the first woman to fly to space when she launched on the Vostok 6 mission 16 June 1963.

Arrived at Orion around 2:30pm UK time (4:30pm local) yesterday.  It is as had been described to me, a community of family homes surrounding a playing area, a school and a canteen where everyone eats together.  I and the 2 other volunteers who travelled with me from Domedodovo airport were greeted by the Volunteers Organiser who showed us around and then invited us to her house for tea and we sat and discussed the history of Orion, its sister community Kitezh as well as introducing ourselves.  Before supper I unpacked my cases and was then invited for tea by a Belarusian lady who was visiting with her family as a volunteer and we chatted with the aid of Google translate which was a cheat but far preferable to sitting in silence whilst sipping tea! There are many visitors here in the  Community from Russia and other Eastern European countries many who return regularly to help out and it is interesting to take time out to find out where they are from and their connection with Orion.  After supper, at 9pm, we met at the house which I am staying in and had tea, the third time in one day – I’ve not drunk tea for over 30 years however it is a Russian cultural past-time and a good opportunity to meet and talk with the people living here.

Today has been the first of many busy days.  For half of the day I helped with what I can best describe as pointing a traditional Russian timber house, not with cement but by packing in straw into the timber joins using a mallet and chisel.  Later in the afternoon we took several of the children for a walk in the stunning surrounding woodland.

They say that a picture paints a thousand words and so rather than describe today I have inserted a few pictures.  Next update will be on Sunday, thanks for reading this and do contact me if you have any questions about my stay here in Orion. 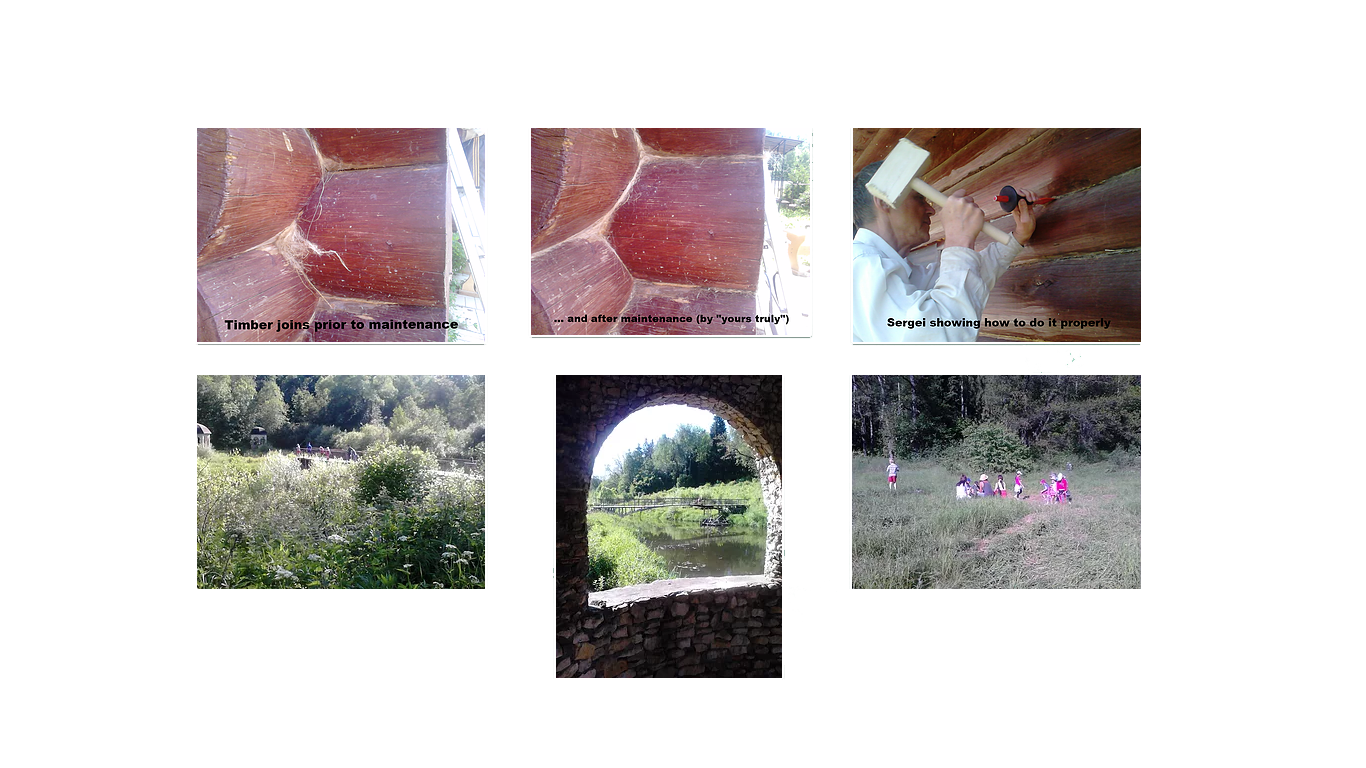 Today is a rest day, meaning that few people work, some go away to visit friends and relatives and there are no community meals – volunteers eat at their host family’s home.  Friday and Saturday were full, busy days as I continued with my newly learned skills of what I can best describe pointing timber joists with straw using a mallet and chisel.  For the previous 2 days we have been working on a smaller house that is intended for the use of visiting guests with completion hoped to be in the next 2 weeks so there have been 3 to 4 of us working on it although it is a process that takes time, however traditional methods are rarely quick but look and feel so much better.  Weather has been damp which encourages kamar to come out of the grasses to feed on you (these are not squid {“calamari”} arising from the woodland as you may be forgiven from first reading, kamar is Russian for mosquito).  Yours truely brought excessive amounts of repellant from the UK to deter the nasty creatures but of course have forgotten to apply it before each work session, and now

Thursday I met with the founder of Kitezh and Orion and had tea with him at his house.  We discussed a broad variety of topics in the 45 minutes together including religion, politics and culture.  It was a conversation that I was grateful to have so soon after my arrival here as it helped me to understand more about the background and current workings of the community and also, because it is a community and perhaps collectively questioning my reasons for being here, the opportunity for me to explain why I am visiting.  Just as my strong Russian tea disappeared, so has the content of that private conversation… That evening from 9pm to 11:30pm I chatted with my home’s host and other volunteers again discussing a broad variety of topics which, as you may expect, included the differences (and similarities) of cultures and much translating.

Saturday I was invited for my first chay masalla at a couple’s home during a morning tea break from work.  Chay masalla is translated as Indian tea and comprises a range of spices boiled with milk, it is absolutley delicious and needs no sugar.  The choice of tea is huge here from breakfast tea (but for strength imagine straining hot water through an 80 pack of Tetley’s per cup which in my view as one who hasn’t drunk tea in 30 years makes tea enjoyable to drink) to a vast range of herbal teas including brews from locally grown leaves and herbs.  In the evening I was asked to help with washing up duties and then returned to my room to practise some Russian.

Today has been a relaxing day.  A late breakfast of boiled rice and greens, not my usual weekend bowl of granola, chatting with my host and other volunteers, learning some Russian, eating a late lunch of homemade cous-cous, playing counting games with 2 of the small girls who patiently assisted (or rather instructed) me with my counting in Russian and a visit to the local shop which is no Spar but has all that you need to avoid going into town.

Thank you for reading, please enjoy these pics… 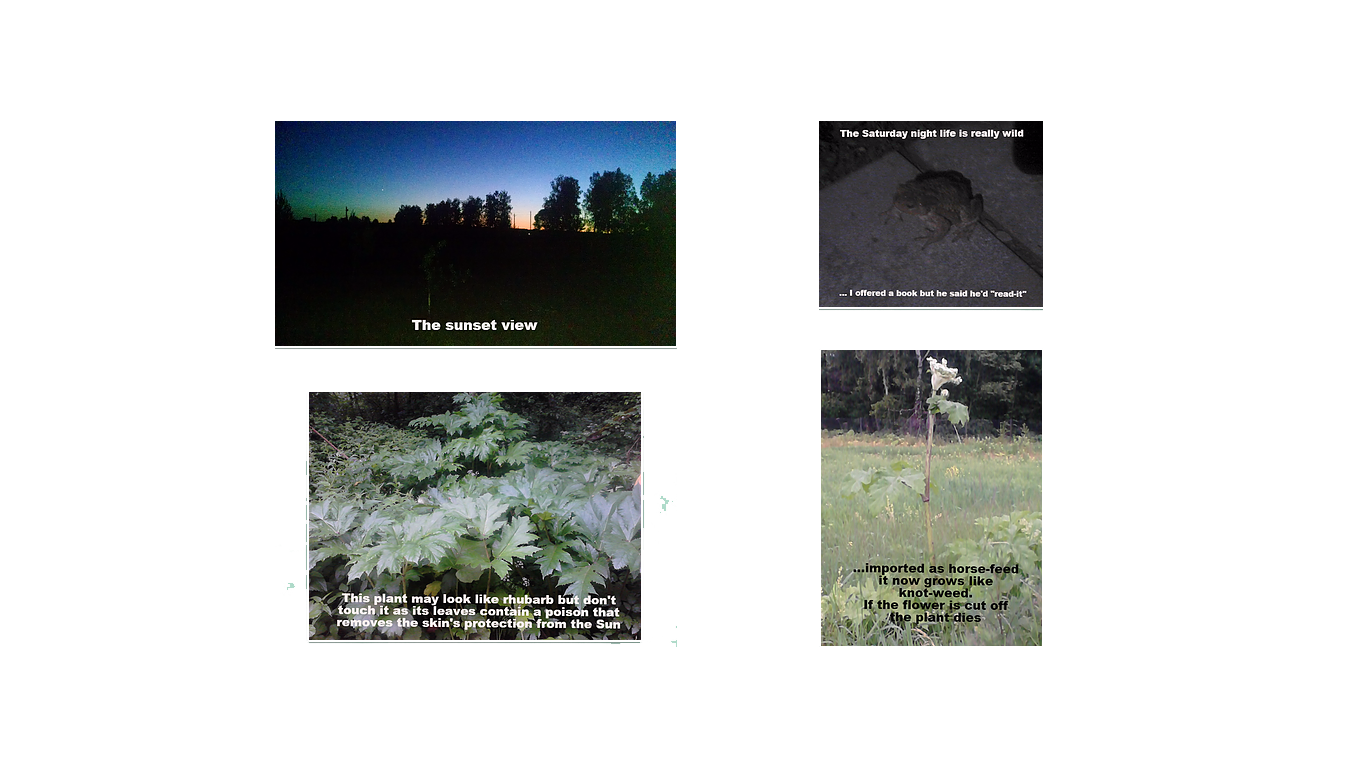